julio 31, 2020 Footlongs and Football Are the Perfect Pair as the National Football League Announces Subway® Restaurants as Official Sponsor of the NFL2020-07-31T08:00:00+00:00 Connecticut No Comment 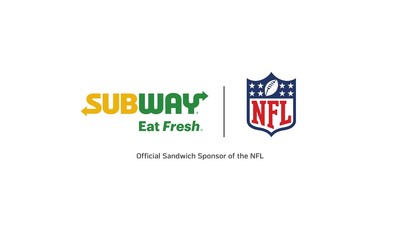 As an official multi-year sponsor of the NFL, Subway will have exclusive marketing rights and activation opportunities at key NFL events and experiences. The brand will also sponsor NFL FLAG, the largest U.S. flag football league and support NFL PLAY 60, which is dedicated to keeping youth active and healthy. Subway will align with key teams, players and partners to bring the sponsorship to life.

«With NFL fans more excited than ever for the return of football, we are thrilled to have Subway, as an official league sponsor,» said Renie Anderson, Chief Revenue Officer & EVP, NFL Partnerships. «We are also excited for Subway’s partnership in flag football and our Play 60 initiatives. We look forward to working closely with them to help grow the sport of football and make the NFL season better than ever for our fans.»

Subway® restaurants are the ideal stop for families and athletes across the globe looking to make better choices and fuel their days and practices with better options like sandwiches made with delicious ingredients – from freshly-baked bread, to fresh veggies, and a variety of toppings and sauces.

«We know Subway fans are football fans and our footlongs have always been the perfect game night food, so we are proud to make the connection official with this multi-year NFL partnership,» said Carrie Walsh, Chief Marketing Officer of Subway. «We are a brand that prides ourselves on making it easier for fans and for athletes to be a little better every day. That’s why we’re excited to add our fresh flavor and make this and every football season, footlong season. With millions of sandwich combinations and more Subway restaurant locations across the country than any other chain, the possibilities for engagement are endless.»

About Subway ® Restaurants
The Subway restaurant chain continues to evolve the dining experience, offering guests in more than 100 countries quality ingredients, as well as robust flavor combinations while serving over 6 million made-to-order sandwiches created each day. All Subway restaurants are owned and operated by more than 20,000 Franchise Owners, who employ many people in their communities. The Subway experience is also delivered online at Subway.com, through Subway.com/Delivers, and the Subway® App.

About NFL FLAG
NFL FLAG is an NFL-licensed property of more than 1,600 locally operated leagues and over 500,000 youth athletes across all 50 states. NFL FLAG is a fun and accessible non-contact program available for girls and boys ages 5-17. Players benefit by being physically active through non-contact, continuous action while learning the fundamentals of football as well as lessons in teamwork and sportsmanship. Reigning Champs Experiences (RCX) is the official operator of NFL FLAG.

About NFL PLAY 60
NFL PLAY 60 is the League’s national youth health and wellness campaign to encourage kids to get physically active for at least 60 minutes a day. Since PLAY 60 launched in 2007, the NFL has committed more than $352 million to youth health and fitness through PLAY 60 programming, grants and media time for public service announcements. Over the past decade, the NFL has partnered with leading academic, scientific and nonprofit organizations, including the American Heart Association, National Dairy Council, Special Olympics, Shriners Hospitals for Children, St. Jude, and the United Way, to help children of all abilities lead healthier, active lives. The NFL and its clubs have supported programs in over 73,000 schools and constructed more than 265 youth fitness zones nationwide—giving more than 38 million children an opportunity to boost their physical activity levels. Research conducted by The Cooper Institute through its NFL PLAY 60 FitnessGram® Project revealed annual improvements in aerobic capacity and body mass index for students participating in NFL PLAY 60 programming when compared to schools not utilizing NFL PLAY 60 programs. The NFL and its partners are committed to continue the PLAY 60 movement for an active and healthier generation for years to come.