NEW HAVEN, Conn., Nov. 22, 2021 /PRNewswire/ -- Avelo Airlines is making the hunt for the world's hottest and most elusive sold-out holiday gift a little easier. Just in time for the holidays, Connecticut's newest, ultra-convenient and most affordable airline is giving away a one-of-a-kind "Spirit of the Havens" PS5 gaming system through The Avelo Spirit of the Havens Sweepstakes. 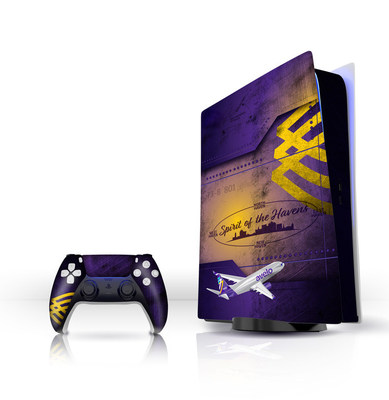 To enter, and for complete sweepstakes rules, follow AveloAir on Instagram. The giveaway is open today through December 5, 2021 to Connecticut residents that are at least 18 years old. The winner will be selected in a random drawing from eligible entrants on December 8. No purchase is necessary.

"The PS5 is the hottest holiday present on the planet and Avelo is excited to make this dream gift a reality for one very lucky Connecticut gamer," said Avelo Chairman and CEO Andrew Levy. "We are proud to be part of the Southern Connecticut community and wish everyone a Happy Thanksgiving."

The PS5 is a home video game system featuring a lightening-fast, ultra-immersive experience that is part of the ninth generation of video game consoles. The PS system is one of the best-selling video game platforms of all time. The PS5 alone has sold more than 10 million units since its global debut one year ago.

Avelo is the first airline to offer nonstop flights between HVN and Florida. Avelo's arrival to HVN also marks the largest expansion of service at HVN in more than 30 years. Avelo is investing $1.2 million to help upgrade and modernize facilities and operations as part of an overall $100 million project at HVN. The airport expansion will include a new terminal and extended runway spearheaded by airport operator Avports.

Over the past 90 days, Avelo has hired more than 85 HVN-based Crewmembers (what the airline calls its employees), including flight attendants, pilots, airport customer service representatives, operations-related roles, as well as managers and supervisors. Avelo and HVN expect to have more than 100 aviation professionals based at the airport by the end of 2021.

A Different, Better and More Affordable Travel Experience
Avelo's everyday low fares have no change or cancellation fees. There is also no charge for Customers who choose to make reservations by phone. Additionally, Avelo offers several unbundled travel-enhancing options that give Customers the flexibility to pay for what they value, including priority boarding, checked bags, carry-on overhead bags, and for bringing a pet in the cabin.

The single-class, fuel-efficient 147-seat 737-700 mainline jets Avelo operates from HVN offer a more spacious and comfortable experience than the regional jets that historically served this airport. Customers may choose from several seating options, including seats with extra leg room, as well as pre-reserved window and aisle seating.

Avelo became America's first new scheduled airline in nearly 15 years when it initiated service on April 28, 2021, from its first base at Los Angeles' Hollywood Burbank Airport (BUR). The airline  which offers a convenient, affordable and caring experience  currently serves 16 popular destinations across the U.S.

Avelo is distinguished by its Soul of Service culture. The culture is grounded in a "One Crew" mindset that promotes a welcoming and caring experience. By caring for one another and owning their commitments, Avelo Crewmembers focus on anticipating and understanding Customer needs on the ground and in the air.

About Avelo Airlines
Avelo Airlines was founded with a simple purpose  to Inspire Travel. The airline offers Customers time and money-saving convenience, very low fares, and a refreshingly smooth and caring experience through its Avelo Soul of Service culture. Operating a fleet of Boeing Next Generation 737 aircraft, Avelo serves 16 popular destinations across the U.S., including its West Coast base at Los Angeles' Hollywood Burbank Airport (BUR) and its East Coast base at Tweed-New Haven Airport (HVN). For more information visit AveloAir.com. Avelo BROLL + Images here.